The exhibition presents 15 Republic of Korea and ASEAN Nations artists' artworks representing diplomatic encounters, moments of friction, and strategic alignments as the repercussions and pragmatics of friendship between Afrika and Southeast Asia 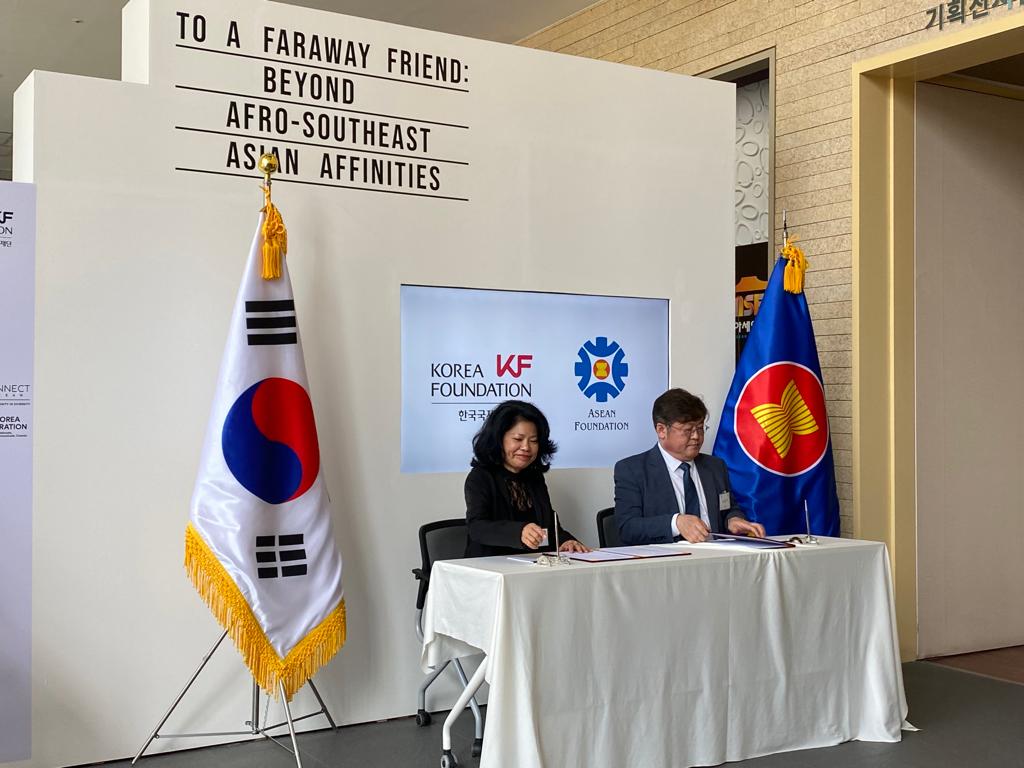 Busan, 2 July 2022 – The ASEAN Foundation and ASEAN Culture House / Korea Foundation co-organise the exhibition “To A Faraway Friend: Beyond Afro-Southeast Asian Affinities”. The exhibition opens on July 2, 2022 and runs until October 2, 2022.

Curated by an international team comprising Carlos Quijon Jnr from the Philippines, Kathleen Ditzig from Singapore, and Sooyoung Leam from Korea, this special collaborative project truly reflects the essence of the KONNECT ASEAN programme, the ASEAN Foundation’s arts programme supported by the Republic of Korea.

The exhibition presents 15 Republic of Korea and ASEAN Nations artists' artworks representing diplomatic encounters, moments of friction, and strategic alignments as the repercussions and pragmatics of friendship between Afrika and Southeast Asia.

The opening events also include a VIP Opening Reception and MOU signing on July 4, 2022 between the ASEAN Foundation and Korea Foundation. Representing the ASEAN Culture House is the Executive Vice President, Jong Kook Rhee, while the ASEAN Foundation is represented by the Executive Director, Dr Yang Mee Eng. The MOU aims to promote and expand friendly exchanges and mutual understanding through arts and culture. The continued collaboration between ASEAN Foundation and ASEAN Culture House under the banner of KONNECT ASEAN highlights the importance of multilateral collaboration in re-strengthening our efforts to promote ASEAN awareness and identity in the post-pandemic era.

ASEAN has, since its inception, done much to facilitate people-to-people exchange in the arts sector across Southeast Asia to encourage dialogue and debate. This unique space for artistic discourse that allowed for pluralistic notions of what constituted a regional artistic identity and aesthetic is one of ASEAN’s great legacies and is widely discussed, researched, and acknowledged by a new generation of art historians and curators.

In 2019, the Republic of Korea celebrated 30 years of diplomatic relations with ASEAN. In the same year, the ASEAN-Korea Cooperation Fund (AKCF) supported KONNECT ASEAN - An ASEAN-Republic of Korea Arts and Cultural Programme. Administered by the ASEAN Foundation, KONNECT ASEAN signals both an eagerness by ASEAN to revitalise its once integral role in contemporary visual arts and Korea’s sincerity in establishing closer ties with ASEAN.