Being a math student at the National University of Laos, Khuanthida Phoumivong has always know how useful data analytics is for her study. When she heard about the ASEAN Data Science Explorers, a programme by the ASEAN Foundation and SAP, she was curious but hesitant to join as she never entered a data analytics competition before. “My friends persuaded me to participate in the programme as they believed it would be good for me,” Khuanthida said. She then formed a team with her friend, Bounma Inthapattha, and applied for the programme.

Khuanthida decided to pick agriculture as the main topic for her team’s storyboard and began to scour the internet for data. She managed to find many interesting insights on agriculture in ASEAN. “It has always been our plan to pick an important topic that is easy to research,” she admitted. “Agriculture is one of the most important topics in ASEAN and as it happens, there are a lot of data about it on the internet.” 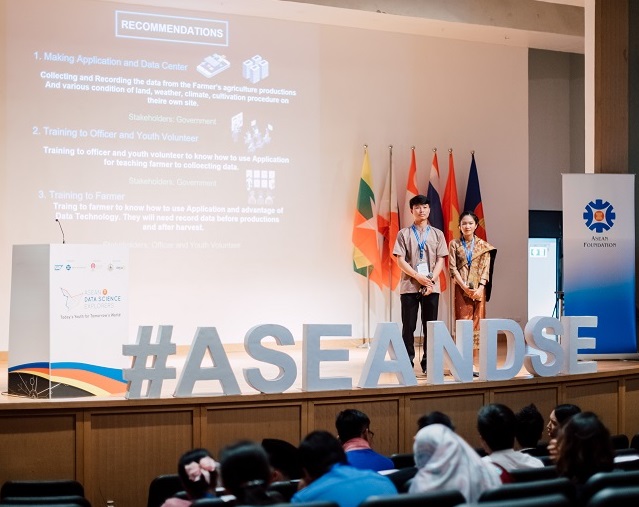 It was not exactly a smooth journey for her as she had to learn from scratch about how to develop a data-driven storyboard by using SAP Analytics Cloud. “Developing a convincing storyboard was something that is entirely new to me,” Khuanthida confessed. “I had to familiarise myself with the software first before trying to produce a good storyboard.”

She was also nervous about presenting the storyboard in front of people. She managed to muster up courage after consulting with her teammate and mentor. “I practiced a lot in front of mirror and with Bounma to ensure that I delivered the right message,” Khuanthida said. Her persistence paid off as she managed to become the National Winners of ADSE 2019 from Lao PDR and represent her country in the Regional Finals in Bangkok, Thailand.

After her participation in ADSE 2019, Khuanthida felt that she has improved as a student. “I felt that my professional skills had improved a lot after the competition,” she said. “I’m much better now at analysing data and doing public speaking.”

Khuanthida was also grateful for the very meaningful connection she built with the other contestants from other ASEAN countries. “I will always cherish the friendship that I formed with other ASEAN youth throughout the programme,” she said.